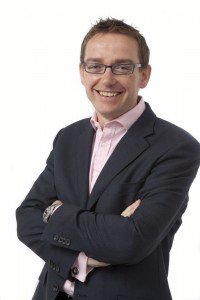 Interview: How one estate agent is doubling website enquiries

In this post, I interview Reuben Barrett, Managing Director of York estate agents, Coalters. Reuben reveals how, despite the issues with the housing market, he has doubled the number of enquiries his business receives using split-testing tools and a laser-like focus on improving conversion.

Hi Reuben, could you tell me about yourself, and the business, Coalters, you run?

I originally came here to study engineering at York University, and after that moved down to London to work in within the banking sector, where I stayed for 11 years.

During my time in London, I completed a MBA at INSEAD, and 6 years ago I returned to York to start an estate agency. I now run Coalters, a York estate agents.

I am married, with two children, as well as being a keen cyclist and cycle most Saturdays with the York Pedallers.

What do you think makes a successful website for an estate agent?

For me it’s a process of attracting suitable traffic and then converting that traffic into a positive outcome. For Coalters that outcome is for property sellers, buyers, landlords or tenants to contact us.

I learnt a lot of what I know from setting up a web-only estate agency as well as following other internet-only businesses. I realised through a process of trial and error and watching how other websites did it, that you had to simplify the process of getting the visitor to ‘convert’.

Often, our old website had far too many call-to-actions, and too many different navigation paths. With Coalters, I have tried to simplify everything, and re-design the navigation so that ‘all roads lead to Rome’

What have you done to optimise your website and what results have you achieved?

As I said, I learnt a lot of building a website for our previous Web-only estate agency. So with the Coalters’ web site I had a much clearer idea of what I wanted to achieve.

In the course of improving the website, we have managed to double our number of requests for valuations.

I have used tools like Google Analytics, ClickTale and especially Google Website Optimiser to test different versions of the same page.

We have successfully tested introducing video onto the home page, and that’s worked really well. We got a 15% uplift when we got the guy in the video to point to the “Book your free valuation now” button.

We tested different colour buttons, different sizes, having arrows to point at each field the visitor has to fill in as well as varying levels of contrast in the main navigation buttons.

On the property details page, we have experimented with very aggressive messaging as well as quite subtle versions, and what we have found that converts highest, in split tests, is a third version that I would call “reasonably disruptive”.

But I wouldn’t have known this without testing the three versions side-by-side.

What have you learnt and what has surprised you most?

What has been great is having bets in the office as to which version will convert the best. We watch the results come in minute-by-minute and are often surprised.

Once we know which version is the clear winner, part of me isn’t that surprised as with hindsight, I now understand why this particular generated the best results. But you have to run the tests to get that 20/20 hindsight vision.

I suppose there’s always a bit of post-rationalisation that goes on.

A lot of companies don’t focus on optimising their website, why do you think this is?

I think you need a basic understanding of what split-testing is and the technology involved. But most companies still treat their website as ‘brochureware’ and just say to themselves we can put a tick in the box marked ‘got a website’.

Another thing, businesses don’t focus on the call to actions and some don’t really get the whole idea of testing different versions.

Partly, it might be about resource and cost, but for us the doubling of the number of enquiries we receive has been easily worth the time and money we have spent.

I have got some new ideas for the home page to try out, including replacing static graphics with videos. It will be interesting to see whether we get an uplift in enquiries and by how much.

But it’s an ongoing process that never stops, just continuing to tweak small things and see what the impact is.

Great, Reuben. Thanks very much for your time and I wish you well with Coalters