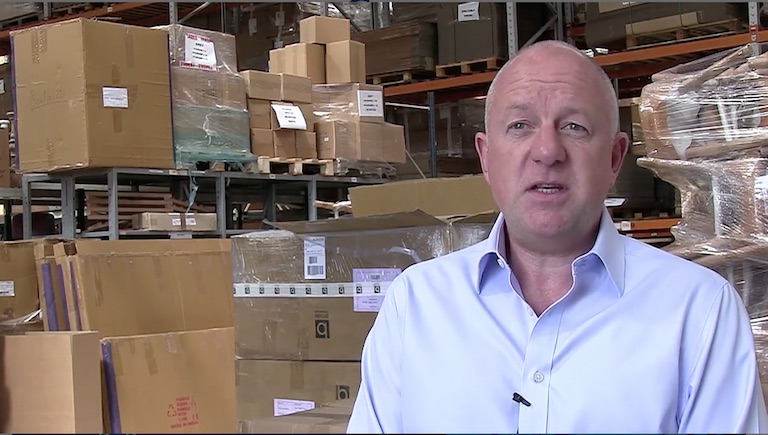 Homeware retailer Cox & Cox turned to AWA digital in 2014 to give its web sales a boost. Managing Director, Rod Taylor explains: “We had more than 3,000 unique visitors to the site every day, but only 200 converting, so I realised that we were leaving a lot on the table.” Rod believes in hiring experts in the field and decided to work with AWA based on a personal recommendation.

AWA’s Chief Operations Officer Johann van Tonder, who led the project, needed to dig deep to find improvements as the Cox & Cox site was relatively well optimised with a higher than average conversion rate. However, once research began in earnest, it was clear that more could be done and a number of features could be improved.

Deciding what to optimise first

“We initially recommended focusing on navigation and product pages as the two areas most likely to bring significant results.” The AWA creative teams designed new web pages, which were A/B split tested. In a series of controlled experiments, two different web pages were shown to visitors. This did not require any re-coding of the main site. Half saw the original web page and the other half a new, improved page. Only when the new page was proven to win more sales would it go live.

After carrying out six strategic split tests and analysing the results, the cumulative results from the first phase of AWA digital’s Conversion Rate Optimisation (CRO) programme for Cox & Cox showed an overall increase in Revenue Per Visitor (RPV) of 107%.

Read on to find out more about the tests and the results each one yielded.

The first test was described by Johann as ‘a rapid needle mover’. AWA digital’s usability research suggested that the size of the dropdown box on Cox & Cox’s homepage was too large and obscured the main site content, affecting the buying process. 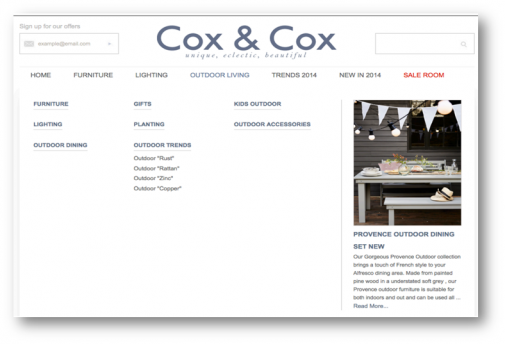 A new page was designed making the dropdown area smaller and more defined to improve the experience for the customer. 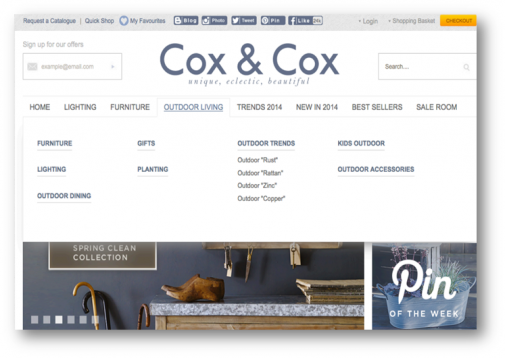 Split testing showed a 12.9% uplift in Revenue Per Visitor. Johann explained the thinking behind the success of this test. “Customers said that when they previously activated the dropdown box, the rest of the page ‘vanished’ and they thought there was a fault on the site or they had ‘broken it’, causing some to abort their visit.”

Sometimes, tiny alterations can make a big difference. In this test, just two words is all it took.
Customer research revealed that categories such as ‘lighting’,’ furniture’ and ‘outdoor living’ were well understood. However, one section was labelled ‘home’ and positioned in the left hand corner, causing customers to confuse this with the website homepage.

Said Johann: “To make a clear distinction between this section and the homepage link, we tested a new webpage renaming the link ‘indoor living’,

This resulted in improved navigation and a rise in Revenue Per Visitor of 7.2%.”

During usability research, Cox & Cox customers complained about the lack of intuitive navigation on the website and said that there were too many product sub categories listed on one page.

Said Johann: “After carrying out usage pattern analysis, we discovered that many of the categories on the right hand side were ignored altogether.

“We suggested reorganising the dropdown structure and creating fewer categories to increase the Revenue Per Visitor. 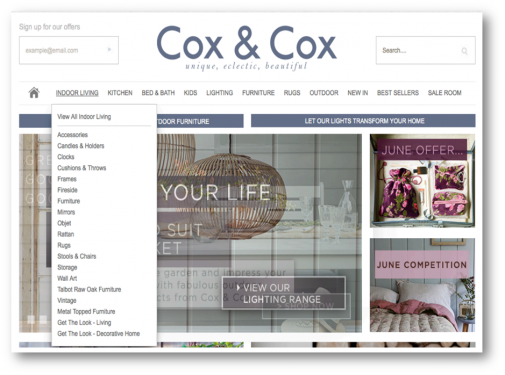 Split testing revealed a 5.9% uplift – proving that visitors bought more when they were able to navigate to the area they were looking for more directly.”

Usability testers told us that one of the key questions that they were trying to answer on the product page was whether the item they had set their heart on was in stock or not.

AWA suggested making the delivery information less prominent and instead highlighting the availability of products in a ‘In stock, ready to ship’ feature. 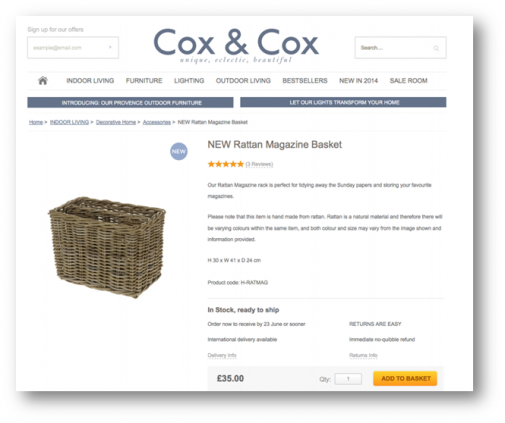 Johann said: “This addressed a key concern for customers – the availability of the product and when it will be delivered. By reversing the prominence of these two features, our split test showed an increase in Revenue Per Visitor of 5.7% and a 32% increase in items added to the basket.”

When AWA started working with Cox & Cox, many of the products sold on the site were represented by just one or two images which didn’t show them to their full advantage.

Said Johann: “We know from our experience that customers interact very closely with product images and want to replicate the experience they would have handling the item in a retail environment.

“In user testing, customers said that they expected the image to clearly demonstrate key features. For example, one customers told us that she wanted to know what light pattern a lamp would reflect on the wall. Another said she wanted to see how a rug was made, and know how soft it was, so she could appreciate the quality.”

To address this, AWA suggested that Cox & Cox provide a number of images for each product.

Added Johann: “Based on customer feedback we developed a formula for photography. For example we suggested shooting images to detailing such as the weave on the back of a rug and a side shot to show its thickness, or shooting a folding stool from a number of angles to show it in both positions.”

As part of the Conversion Rate Optimisation programme, Cox & Cox organised a re-shoot for 20% of its products using this formula and a split test was carried out.

This resulted in a 23.9% uplift in Revenue Per Visitor on the products tested, equivalent to an 11.95% site-wide Revenue Per Visitor rise. In addition to this significant uplift, this test was announced as the ‘Product Page – Gold Award’ winner in the WhichTestWon 6th Annual Online Testing Awards, beating entrants from all over the world.

Analysis of the Cox & Cox website showed that product information did not answer key questions and was not structured in the way most likely to convert visitors to customers.

AWA carried out a copy audit and proposed a new template to ensure that key details were properly organised and included, such as buyer’s notes, size information and delivery details. 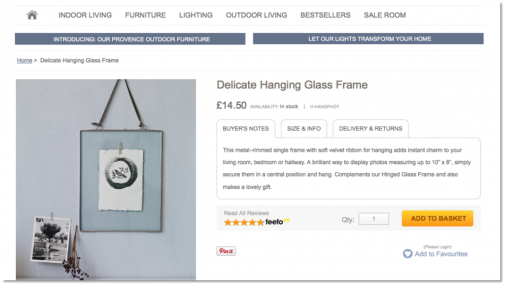 Said Johann: “At the point when visitors are reading the product information displayed with the photographs, they are already engaged with the item, so lively and informative text is needed to help clinch the sale.”

The text for thirty products was re-written by AWA’s professional copywriters and a split test was carried out, resulting in a massive uplift of 36.7% in Revenue Per Visitor.

How web optimisation enhances the brand

For Johann and the AWA team, success is not simply about sales, but about creating a better user experience. “Cox & Cox already had a loyal base of customers who love the unique products they can buy from the company. Improving the website journey is likely to have further enhanced the brand in their minds.”

Rod Taylor is delighted with the results, and said, “Working with AWA digital has been a very enjoyable experience and I believe will be very profitable in the long term. In the beginning, the price of AWA’s services was a concern, but after six months and the results we’ve seen, the value for that spend is not in any doubt.”

Ready to get results like these for your business?