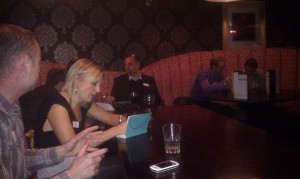 Cold, dark Manchester once again was the venue for our committed band of web analysts, account managers, usability experts and search marketers to meet.

On the agenda tonight was not only a presentation from Lee Duddell of WhatUsersDo.com, but also a discussion about the findings from Econsultancy’s Online Measurement and Stategy Report as well a new feature of our WAW: an interactive quiz.

A number of key points from this year’s report from Econsultancy were discussed including:

Many of the audience were sceptical that even larger organisations had more than one dedicated analyst. One large bank, one of the attendees reported, only had a team of 3 web analysts. Scepticism was also expressed about the proportion of Google Analytics accounts that were thought to be correctly configured. Interestingly, much of the audience thought that the large web analytics vendors were guilty of ignoring the needs of the SME market. However, special mention was made of SCL, who are far more responsive to the needs of smaller organisations.

As per past WAW meetings, we were keen to learn more about useful tools, websites and resources that people had come across since our last meeting. Our list included interesting podcasts, useful apps and overlooked features of Google Analytics. Our meeting’s list is below:-

Not to be outdone by Conversion Thursday London, Dan hosted an interactive quiz, with the audience put in to fiercely competitive teams. Questions included: 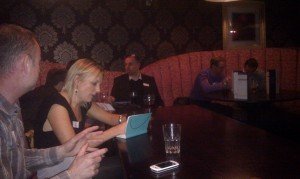 Lee Duddell from WhatUsersDo gave a presentation on how useful usability testing is to boosting conversion rates.

His presentation outlined the key benefits of usability testing. Lee also show a video of one websites’s eight conversion rate killers, all identified by usability testing, from a clumsy registration process to poor product information.

In answer to a question about how to perform usability tests that require a credit card to complete the transaction, Lee listed three options:-

Lee has kindly offered readers of this blog, a free usability test (worth £25) of your (or even your competitor’s) website. Visit www.whatusersdo.com and use “factandfiguresblog” as a voucher code. Don’t delay this voucher code will expire on Friday 5th November 2010.

After some discussion, the group decided to adopt a title “Conversion Thursday” in preference to “Web Analytics Wednesday”.

The next meeting in January 2011, will be held under the banner “Conversion Thursday Manchester”. The same broad range of topics will be discussed and all attendees are welcome to come to CT Manchester, but it was felt that ‘conversion’ was a more direct message than ‘web analytics’.