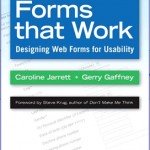 The Science of Online Forms

Any book that has a foreword by Steve Krug, author of my all-time favourite website usability book, Don’t Make Me Think, has got my attention.

Added to that if you just flip through the pages of Forms That Work, you just know Jarrett and Gaffney have emulated Krug’s folksy style and lots of before-and-after visuals – and that’s a good thing. Why ? Because let’s be honest, very few people get excited about online forms, so anything an author can do to make the topic accessible and even winsome deserves praise

Let me start with my conclusion first – if you like waiting to the end of anything to know what someone thinks, I’m sorry I am not that kind of book reviewer – this book is better than you think it is.

Primarily because after reading several sections of the book, you end up saying to yourself ‘Of course, everyone knows that. Doh!’ and that leads you to think that perhaps Jarrett and Gaffney have pulled some kind of con trick. Have they really written a book about online forms that just states the obvious? Initially, I thought they had, and was all ready to give this book the thumbs down. The reality is this, we often complete forms online that are tortuous, long-winded and ill-conceived. So, if the book’s contents are just plain commonsense, a good many people (and the websites they manage) have still a lot to learn.

‘Forms That Work’ begins with naming the three layers of an online form;

These three layers form the structure for the book, as chapters proceed to illustrate the dos and donts in the creation of a successful online form. What I particularly liked was how Jarrett and Gaffney segment users of online forms into three types:

The interesting point is how online forms have to cater for all type of users, and presumably for those who simply refuse to complete the form, there has to be other ways in which the organisation can garner the same information. In most situations this is likely to result in a telephone call or a visit to an office – this is an expense. So, given the known costs of someone taking a telephone call or spending time with a customer who feasibly could have completed the online form without further help, there is a business case for investing improving your online forms. Well-conceived online forms will save you money and give the user a good experience, and add to your standing as an organisation that’s ‘easy to do business with’. It’s a point that the book could have made strongly – the ROI of great online forms. A title for my next book, perhaps?

A crucial element in the form’s ‘relationship’ between the user and the organisation is the need to reduce social costs. For many, filling in an online form can feel like hard work, and if the form ‘punishes’ you for getting it wrong, or makes you feel stupid or inadequate, then no surprises when users either abandon the form altogether or pick up the phone . Three pieces of advice really stand out:

Plain commonsense when you think about it, but remind yourself how many times you’ve become frustrated when trying to fill in a form, and for some reason all your work has been lost and you have to start again.

Onto the Conversation layer of an online form, and once again my initial response to a section titled “The four steps in answering a question” is ‘oh, for goodness sakes, surely people know how to answer a question’. But actually some people in charge of websites do have a particular knack for making the answering of a question far more difficult than it needs to be. Ask yourself these questions:

Sometimes, part of the difficulty as Jarrett and Gaffney explain is that instructions are wordy, and or use unfamiliar words when a common one will suffice. The book mentions a great tool called ‘Vocab Profile’ which tells you how many of your words are outside the 2,000 most commonly used. Steve Krug’s maxim of ‘Don’t Make Me Think is super appropriate when choosing words to include on your online form.

Word order is also crucial to understanding the question. ‘Forms That Work’ demonstrates the point with the use of “title”. Think about this.

Lastly, the section on Appearance of forms is really useful, with lots of hints and tips on how to improve online forms based on eye-tracking studies. Particularly revealing was what users see around an input box.

I have already told you what I think about this book – on first skim it appears to state the obvious, but the science and rational applied to careful dissection of the common mistake website owners make, show the value of a book like this.

There are some irritations, though. The redaction or blocking out of hardly sensitive information like postcodes and company names seemed pointless, and spoiled the flow of the text. Secondly, the emphasis on analysing online forms appearing on government websites somewhat pigeonholed the book. Online forms appear on all sorts of websites, albeit that government ones unfortunately are those that we struggle with the most.

Finally, the authors could have spent some time explaining that although much of what they say is borne out of their experience and although it may appear as commonsense, the number of poorly constructed forms is evidence enough that further work is required. As more processes, from renewing your car insurance to booking a meal can be completed online, the greater the importance of making online form work, and work well.

The costs of users refusing to use your online forms are very real.